Throughout pregnancy, everyone’s asked if we’re going to find out if it’s a boy or a girl. Obviously this choice is individual, but here are some of the reasons I wanted to know:

We got the ultrasound this week, and found out that the baby is a girl! More importantly she’s got all the pieces she’s supposed to have and no extra eyes or tentacles.

It was really amazing to see the baby’s spine and heart, and to see the her move and kick! She kept putting her hands in front of her face, preventing the ultrasound technician from getting her final measurements. It seems like many mamas have such clear ultrasound pictures, but mine mostly look like nondescript blobs. Apparently the umbilical cord was getting included in the 3D rendering as if it was part of the baby’s body. Every now and then, the technician would capture a still frame of the baby and exclaim, “Oh! Look at how cute she is!” As I tilted my head in various directions to change perspective, I’d think, That’s a baby?? I don’t really see it… We did get one adorable picture though. You can tell this little one’s got a personality! 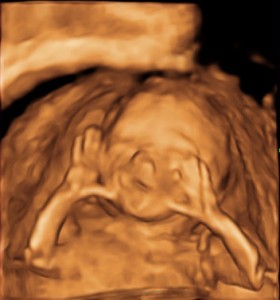 I laughed out loud when my dad said this picture looked like Han Solo when he was cryogenically frozen: 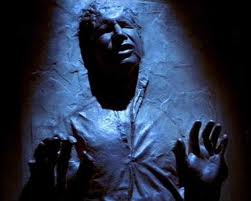 Is it wrong that I’m already teasing my kid?

The baby was active and moving throughout the ultrasound (I don’t think she liked being squished and prodded), and I was surprised I wasn’t feeling her move more. The technician told me that my placenta is in the front, which means I wont feel the baby moving much until later in pregnancy. That was a little disappointing to hear. Feeling that one little kick last week made her feel real to me.

I found out the baby’s sex just in time for me to add some gender-specific flare to my hand-painted Halloween costume: 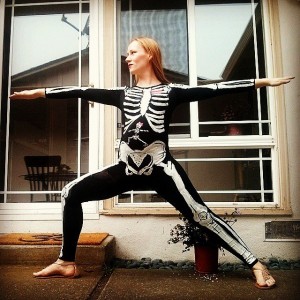 Pregnant skeleton with a baby girl. 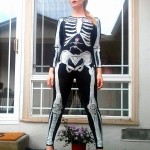 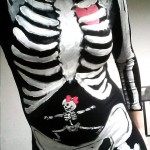 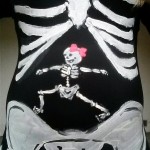 (I was inspired by shirts like this one on Etsy, but wanted a full body costume, and thought it would be fun to make it match closer to my own skeletal structure)

Before the ultrasound, so many people had predicted that the baby was a girl that I couldn’t help but have that expectation too. The day before the ultrasound I sat down and came up with a list of potential middle names for boys, just to get in the mindset for that possibility (Richard and I already had boys and girls first names picked out). It’s a good thing it turned out to be a girl, because Richard veto’d every single one of these!

My list of potential middle names for a boy that got blanket veto’d by Richard.

However, I had to sign a form saying that I understand the ultrasound technicians can get the sex wrong, so you never know! In March, we may be announcing the birth of little Jasper Midnight-Courage Levasseur. Just kidding—neither Richard nor my mom would let me get away with that name.