This year, my lululoves at lululemon athletica Union Square, San Francisco, treated me to indulge in four full days of the Squaw Valley Wanderlust Festival. I am so grateful to them and to the Wanderlust organizers. The festival blew me away; it totally exceeded my expectations. In the spirit of sharing the love, here are five things I learned from my weekend in the mountains:

1. According to Annie Carpenter, in challenging poses, our bodies have “escape valves” that keep us from holding steady and strong. For example, in handstand, many yogis collapse into the lower back or shoulders, so they have no choice but to fall out of the pose. To learn to hold a challenging pose, yogis must identify the root of their personal escape valve (be tightness, weakness, fear, or something else), and then instead of try to find their way around it or compensate for it, address it and move through it.

2. Matt Giordano taught one of the most intentional flows I’ve practiced in a while. Each pose was built on the foundation of previous poses. Among many other things, from Matt I learned that a twist is a twist, not a backbend. In revolved high lunge, we tend to cock the front hip out to the side as an escape valve (thanks for the terminology, Annie Carpenter) so that we can backbend instead of twist, and still feel like we’re in the pose. Matt had us “go into the dysfunction” (as Amy Ippoliti labelled a similar contrast in one of her workshops) by cocking the hip out to the side and then harnessing it back into proper alignment; by hyperextending the spine and then restabilizing. I’m not sure I’ve ever truly twisted that deeply in my life.

3. In Amy Ippoliti‘s Core Potential workshop, I learned that this pose is a thing:

We warmed up for it doing some pretty fun and funky core stuff, which I will definitely share with you in my upcoming public classes.

4. My friend and fellow yoga teacher, Nacera, and I showed up for Gurmukh Kaur Khalsa’s workshop about 20 minutes late, and as we approached the giant tent, we saw that all 150-200 students were dancing their hearts out. Both of us were pretty tentative about going in there. One of us suggested going to another workshop and the other said, “maybe they’ll stop dancing by the time we get in there.” They didn’t. But as soon as we kicked off our shoes and rolled out our mats, we immediately joined into the shimmying, shaking, and twirling. It was contagious! 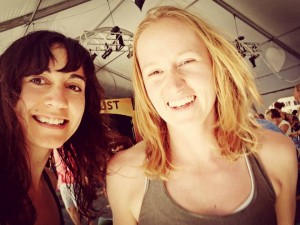 Nacera and me dancing with Gurmukh (Selfie credit: Nacera Mekki)

The workshop ended with a yummy 17 minute savasana. Afterward, Nacera and I went to thank Gurmukh for her workshop. We said, “We’re totally blissed out.” She replied “Keep it going. That’s reality.” Woah. Bliss is reality. Yoga just reminds us to notice that.

5. To end my Wanderlust weekend, I had two workshops in a row that referred to sankalpa, which means divine purpose, will, or oathe. In Sienna Sherman‘s workshop, we were asked to identify our personal sankalpa as yoga teachers. At the time of that workshop, I identified my sankalpa as empowering people to choose their path rather than moving through life mindlessly and without questioning. I went straight from that into Yoga Nidra with Rod Stryker, which consisted of two long sessions of complete relaxation. The first session was lovely and blissful. In the second session I was completely distracted from my Yoga Nidra by a deluge of ideas for my upcoming Yoga EMPOWER Bootcamp at Thriveability. I realized this six-week program is the ultimate vehicle to realize my sankalpa. Stay tuned for more info about it and sign-up now if you’re interested, because space is limited!

I cannot wait for Wanderlust next year!