Forget waiting until twelve weeks. I finally announced on Facebook that I’m pregnant (I hated keeping the secret). Before I was pregnant, I foresaw myself being that pregnant lady who gets a photo in same position and clothing every single day and strings them together into a time lapse YouTube video after the baby is born. Turns out modeling in front of a camera is the last thing I feel like doing while nauseous, so I have very few photos of my first trimester. However, Wednesday morning I had a lull in my nausea, and I mustered up the wherewithal to snap a photo in our backyard to share on Facebook: 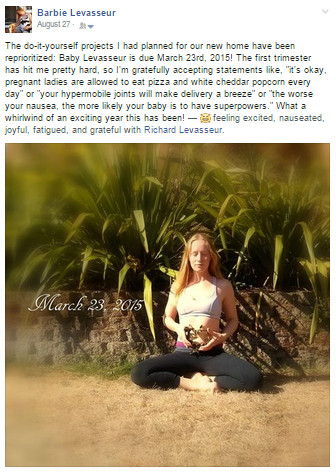 It was so nice to share the news with friends and get some much-needed support and encouragement around the nausea and fatigue! Turns out I let the baby out of the bag just in time, because I couple days later I had quite an embarrassing event, and I don’t know how I would have coped if I hadn’t been able to share my chagrin on Facebook and laugh at myself with friends.

Saturday was a productive day: All morning I toured the most promising garage sales within a 45-minute drive, and came back with a carful of small furniture items we need for our new house. That afternoon I talked Richard into stopping off at some thrift stores to go desk shopping on our way to Lowe’s (we’ve been chipping away at a long list of home improvement projects we hope to complete before the baby is born). I was wearing a pair of green cargo capris, which were themselves bought from a thrift store years ago. The button at the top of the fly had been replaced by a safety pin, and many of the snaps that close the pockets had become detached; but, they rode low and weren’t skintight, so they were one of the few pairs of pants I still enjoyed wearing.

As I got back in the car after visiting our last thrift store I thought I heard something rip. I shifted from side-to-side and my pants felt intact, so I rationalized that I’d just imagined it. Our next stop was a decorative hardware store, which we were disappointed to find was closed for the long weekend. As passersby strolled behind us on the sidewalk, Richard and I alternately stood on tiptoes or bent over to peer through the windows at the various options they had for faucets and sinks. This time when I got back into the car, I definitely heard something rip. I felt around to my butt and shrieked. There was an enormous split in my pants that ran from my waistband to my mid thigh, completely exposing my lacy lavender panties. When I divulged what had happened to Richard, he howled with laughter and couldn’t stop.

I haven’t gained that much weight during pregnancy—maybe three or four pounds. However, I haven’t been exercising nearly as much, so, because muscle is heavier than fat, I could have easily lost a chunk of muscle and packed on a greater volume of fat to my butt and thighs without gaining an ounce of weight. I’ve had good control over my weight for the last thirteen years, so this kind of temporary shift wouldn’t normally bother me. I gained ten pounds on my ten-day honeymoon in Hawaii; instead of freaking out and enacting a rigorous diet and exercise program when I got home, I simply went back to my normal habits and calmly lost the weight as quickly as I’d gained it. However, something about my butt busting through a hearty fabric like khaki was too much for a pregnant lady to handle.

I saw the humor in what had happened and I was laughing along with Richard, but it was the type of laughter that was a dam restraining a deluge of tears. When he suggested I tie a sweater around my waist so we could still go to Lowe’s, I think he could tell that dam was a about to burst. He didn’t argue when I insisted we go buy me a new pair of pants immediately, and that he come with me for emotional support instead of just dropping me off at the mall. I picked out a pair of loose, low-riding, boyfriend-cut pajama pants, which got me through the rest of our errands.

A day or two later, we went shopping for my first pair of proper maternity pants. 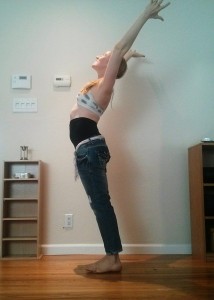 My first pair of maternity pants.

1 thought on “10 Weeks Pregnant: Sharing the Joy (And Splitting My Pants)”