When we measured hamstring flexibility in high school gym class, I blew past the end of the gauge on the sit-and-reach box (which was about the only thing I was good at in P.E.). At 19, when I first set foot in a Bikram Yoga studio, I was already one of the most flexible people in the room. I often had yoga teachers ask me if I was a gymnast or a dancer—I wasn’t; my bendiness is mostly genetic. Needless to say, I’ve always been flexible in certain directions; however, I don’t know if I’ve always been hypermobile.

Flexibility is mainly a function of how long and pliable your muscles are. Hypermobility relates to different tissues. If you removed all the muscles from a human body (don’t try this at home), the bones would maintain a skeleton shape because of tiny straps called ligaments that hold the bones together at the joints. Ligaments have some elasticity, but unlike muscles, they don’t contract and relax. If you work diligently to build flexibility in a muscle, you may quickly lose your flexibility if you stop your stretching regimen. However, if you stretch out your ligaments, they stay that way for a quite a while. Some examples of actions that stretch ligaments:

If the ligaments get so lax that the joints are no longer stable (e.g. the shoulder easily comes out of place in its socket), it is called hypermobility. For people who get to this point, it’s of utmost importance to strengthen and refine control of the muscles around hypmobile joints as a second line of stability. 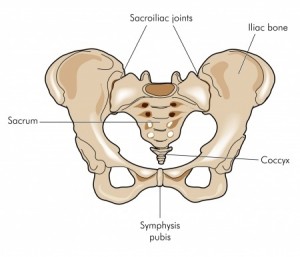 A view of the pelvis from the front.

All of this matters when you’ve got a baby on board because pregnant women’s ligaments become more pliable. Especially during the first trimester, pregnant women’s bodies release elevated levels of a hormone called relaxin. Bear with me for some anatomy: everybody knows that the hip joint is where the thigh bone attaches to the pelvis, but the pelvis also has a couple less illustrious joints that maintain its structure and don’t move that much under normal circumstances. The pelvis is made of two large irregular bones called the coxal bones (the iliac bone labelled in the diagram is part of the coxal bone), which come together in pubic area in the front and wrap around the sides and to the back where they join the sacrum bone, which (along with the coccyx) is the bottom part of the spine. One of relaxin’s function is to relax the ligaments of the joint in the front of the pelvis between the two coxal bones—the pubic symphysis—and of the joints between the coxal bones and the sacrum—the sacroiliac (or SI) joints. It makes birth a heck of a lot easier if the pelvis is mobile.

Because relaxin is released systemically, not just to those few pelvic joints, it affects all the ligaments in the body. People who have tight joints tend to enjoy this period of relative mobility. By the time I got pregnant I’d already been working with a couple hypermobile joints (including my SI joints) for two years. I had worked with a physical therapist to rehabilitate my body enough that I could teach yoga regularly and practice a couple times a week on top of that, but there was definitely a limit on how much stretching I could do before destabilizing my joints. My favorite classes became the ones that prepped the body for inversions, because they usually focused on strengthening instead of stretching. I kept telling myself, Before I get pregnant, I have to get back into doing my physical therapy exercise daily, start doing Pilates three times a week, and maybe even get back into weight training to stabilize my joints. But I didn’t get around to it, and I got pregnant a lot quicker than I thought I would. When I found out I had a baby on the way, I knew I was in trouble.

I’ve never striven to be that mama who’s 36 weeks pregnant doing a one-legged wheel through an Instagram filter (No disrespect intended—you are amazing and gorgeous; thank you for sharing what’s most authentic to you during pregnancy). However, I visualized myself continuing to work through pregnancy. When I was a lifeguard in college, there was a diving coach who worked at the pool named Betty-Sue, or Anna-Jane, or something like that. She was tall and boisterous, had pixie-cut stark red hair (before it was cool), and a giant pregnant belly. Fueled by the only images we had of pregnancy childbirth—the hectic emergency situations portrayed on TV and in movies—the other lifeguards and I were horrified that she was still working. We were sure we’d have to deliver a baby on the pool deck, armed only with the three-minute section about emergency childbirth we’d discussed in our first aid course. Years later, I think back on that diving coach as a powerful role model. During pregnancy, I wanted to be out there fulfilling a purpose greater than my own needs right up until my contractions started.

Needless to say, giving up a big chunk of my teaching was a tough choice, but it came down to the question: “Would you rather have the physical integrity to hold and carry your future child or to continue to practice contortion?” For me, there is no contest. As soon as I found out I was pregnant I stopped practicing yoga in public classes. My home practice has consisted almost exclusively of low lunge, legs up the wall, and savasana. Within a week of finding out I was pregnant I gave a month’s notice on the public vinyasa classes I’d been teaching. In that month it became clear that I’d made the right choice. After sitting cross-legged for long periods my ankles feel kinked. If I go to my full depth in a forward fold (let alone doing it repeatedly in a series of several sun salutations), my SI joints ache like never before until I can do some of my rehab exercises. After samokonasana (side splits), I feel pins and needles in my pubic symphysis for the rest of the day. Even in gentle back bends I feel sharp discomfort in my upper abdominals. Twists make me nauseous. In short, vinyasa yoga is not therapeutic for me at this time. I’ve had several pregnant women practice in my vinyasa classes into the third trimester, but it just isn’t meant to be in my body.

Last week, was my last week teaching vinyasa. I’m continuing to teach Seniors’ Yoga, yoga and meditation to people with chronic pain, and a couple private classes, which has been lovely and soothing for my body this week.

For others who have (or think they may have) hypermobile joints (during or not during pregnancy), here are some yoga-related insights I’ve gleaned from living in a similar body:

Having hypermobile joints can leave us feeling lonely and judged because there are relatively few of us out there, people don’t have much compassion for us (“You’re too flexible? I’d love to have your problem!”), and sometimes we’re even shamed for succumbing to our challenges (yoga teachers may tell us to “let go of our ego” when we’re sinking too deep into yoga poses rather than helping us find alignment in the lax joints we have a hard time sensing). My hypermobile sisters and brothers: know that you are not the only one. It’s okay to have the body you have—just because certain things don’t work for you doesn’t mean your body is bad or wrong or broken. If a teacher makes you feel that way, it’s a sign they don’t have the knowledge to help you; find a new teacher. Your body is perfect, and there is a practice out there that will be therapeutic for you. Trust that if you let go of dogmas around asana, put the other principles of yoga to work, and get a little one-on-one help from an experienced teacher or therapist, you will find your way.