I finally bought the crib mattress. It’s a foam core mattress that is so light I can lift it effortlessly, which made me feel good about myself in the store. It was so exciting to get the crib all set up! It made it feel more real for Richard too, and on his suggestion we order several starter items for the nursery (wipes, diapers, butt cream, etc.) 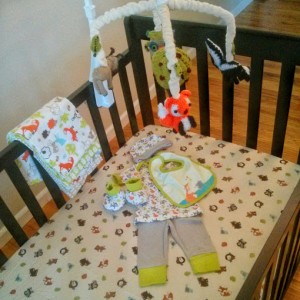 Woodland-themed everything ready to go for when baby arrives! Thank you Mindy for the mobile, Dad for the sheets, and Hope for the clothes.

The biggest milestone of the week was finishing our childbirth preparation class. Early on, a friend recommended I take a third-party birth prep class instead of the one the hospital offered to get less biased education. She also suggested a class that spanned several weeks instead of one packed all into one day so we would have time to digest the information and identify questions. Upon the suggestion of my doula, Richard and I chose to do Rachel Yellin’s 4-day childbirth preparation class, which focuses on the use of relaxation and hypnosis techniques during childbirth. Rachel’s class is definitely geared toward women hoping or an unmedicated birth, but more than that, it’s focused on empowered, conscious birth—on teaching couples about their options so they can make informed choices.

My doula told me that Rachel’s class was experiential rather than just providing a bunch of information about birth, and this was definitely true of the first and last days of the course. We tried out several birthing techniques that involved breathing, relaxation, visualization, affirmation, and intimacy (I wont go into specifics and give away her trade secrets). I’d already read several books about childbirth, so doing a birth prep class that focused more on practice and experience than information and facts appealed to me. Her homework assignments involved bonding time between partners, listening to her hypnosis and relaxation audio program, and checking out other resources she provided. I’d previously been listening to the audio tracks from the Hypnobabies self-study course, and something about Rachel’s tracks was more soothing and relaxing for me. I think it’s partly because her dialog moves along more quickly (without feeling rushed), which makes it easier to follow when I’m feeling restless (That said, I love some of the Hypnobabies techniques and tracks, and hope to incorporate them during my birthing time). Richard enjoys Rachel’s tracks too. After falling asleep to the Relaxation and Affirmations for the Birth Partner track, he says he “inexplicably” wakes up in the morning feeling more affectionate toward me and wanting to help me out and support me in any way he can.

The middle two days were more informational. My favorite part of these days was hearing birth stories from Rachel’s years working as a doula. We also went over many of the interventions the hospital could do, the rationale behind their protocols, what the evidence had to say about these protocols, and what our options were. To some, it may seem overly cautious to question hospital’s protocols, but historically medicalized childbirth doesn’t have the best track record. It is well known that for many years doctors routinely performed episiotomies (cutting into the perineum to make the vaginal opening larger) because there was a theory that this would reduce tearing and other complications. Then they actually did some research and found out that in most cases episiotomies don’t prevent anything and often lead to a challenging recovery.

I’d read about the big ticket items like labor induction techniques and pain medication before, but I’d never thought about whether I’d want to automatically be fitted with an IV upon arrival at the hospital (instead of waiting to see if I’d actually need it) or if I should go along with routine hourly vaginal exams (which arguably aren’t that informative and increase risk of infection every time). Rachel also talked about the interventions hospitals do with babies. Finding out that I could opt out of these procedures was less interesting to me than hearing Rachel’s suggestions for making these procedures gentler and more comfortable for the baby (e.g. have hospital staff calibrate the scale with a blanket and cap so the baby doesn’t have to lie on a cold, hard, paper-covered plastic. Or, hold a warm washcloth over the baby’s foot before the PKU test to improve blood flow enough that the nurse doesn’t have to turn the baby’s heel into a pin cushion trying to get a blood sample).

Before taking this course, I certain things as completely out-of-my-control when there’s actually a chance some of them aren’t. For example, hospitals test for Group B Step (GBS) around 36 weeks (a strain of bacteria that’s benign in the mother, but may be harmful to the baby), and the hospital tells you that you either have it or you don’t, and you can’t do anything about it. It’s true that there isn’t definitive, hard evidence that you can do anything about GBS besides taking the antibiotics they’ll recommend during labor; however, there are other things you can try, like taking probiotics or eating yogurt.

Similarly, if the baby is spending a lot of time head-up in utero (not promising for vaginal birth in the hospital), there are some easy, harmless techniques you can attempt yourself to encourage the baby to turn head down before the hospital recommends medical interventions to try to flip the baby in the last month (like walking up stairs). As it turns out, I would have to put up a fuss at the hospital to officially find out which direction my baby is facing before 36 weeks, so I’ve chosen to pick my battles and wait. I often feel kicking under my ribs and hiccups in my lower belly, so I’m fairly certain the baby spends at least a chunk of her time head down.

Earlier in pregnancy, after reading through the manual for the Hypnobabies Self-Study course (reviewed here), I felt like if I didn’t have the ideal birth situation—with the baby head-down, facing my back, and a pitocin-free labor—I could no longer expect the techniques to be successful. The Hypnobabies affirmations are specific and concrete, relating mostly to that one ideal type of birth. I didn’t get this sense with Rachel’s course. Her affirmations are more vague and focus mostly on intuitively cultivating a healthy, powerful, relaxed internal state, regardless of what type of physical birth occurs. Although it was clear which choices Rachel would make if she were giving birth (which, of course, meant the information was a little biased), I didn’t feel obligated or even expected to agree with her. She seemed genuinely interested in giving parents-to-be the resources to make their own decisions for their bodies and babies.