Before I was ready to have a baby, I must have fearfully Googled “first symptoms of pregnancy” on dozens of occasions in months when my cycle lasted unusually long. Here’s how those early symptoms actually showed up for me when I did get pregnant (thankfully, it happened when I was good and ready!): 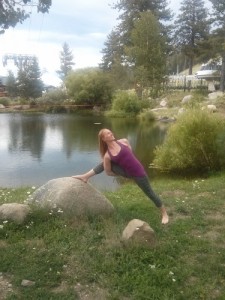 On the Wednesday of this week, my friend Stephanie and I headed up to the Wanderlust Yoga Festival in Squaw Valley. My breasts were sore and I was feeling the teeniest bit nauseous, and I kept telling Steph, “My period is going to start any day now.”

As we walked through the vendors scattered throughout the Olympic Village, Steph kept pointing out free samples: turmeric juice, coconut milk ice cream bars, multigrain crackers with vegan spread—it was a yogis paradise. Carbs—and sugar in particular—are an unshakable vice for me: more than once in university, I polished off a kilogram of wine gums during a single night of studying. But at Wanderlust, every time I imagined eating any of those samples it made my belly ache. As Steph enjoyed her pineapple popsicle, I told her that with maturity and experience I had realized sugar didn’t really serve my body. Yeah right, I should have know something was up. I think the only free samples I got all weekend were juices and when went to acquire them I asked a question my lips had never-before uttered: “What’s your least sweet option?” 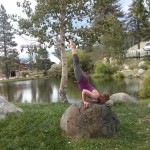 Chin pose. We progressed into a deeper backbend—bending the knees and reaching the toes toward the head—before rolling back into upward facing dog.

In my yoga classes, I pushed my body in a lot of ways I may not have had a known I was pregnant—mostly in a class taught by a pregnant lady, actually. For example, we did a transition from chin balance backbend to upward 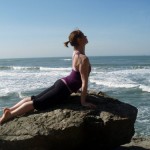 facing dog, rolling along the belly—summary: thud. My practice didn’t feel too different from normal, but I did feel disconnected from my core. Handstand has never been my forte, and I was even less stable trying to kick up into it than usual. I remember telling the partner that I was working with that my core just didn’t seem to feel like turning on, and had the distinct thought, maybe I’m pregnant. However, a week and a half earlier I’d taken a pregnancy test with a negative result, and besides, Richard and I had just barely started trying.

I did a couple amazing guided meditations with Lora McCarville that focused on removing barriers and forming a clear vision for the future. The images that came up for me included me, Richard, three children, and a larger dog than I’d ever want to own. My stance has always been that one kid might be enough—we’ll see how the first one goes and maybe have a second, but that’s it! Who knows what surprises and transformations of opinion the future holds!