Our first night in our new home, we ordered sushi for delivery. Pregnant women aren’t supposed to eat raw meat due to potential pathogens (not to mention that many fish are off the table due to environmental contaminants), but we were lucky to find a restaurant with a large selection of vegetarian rolls. Yum! A couple of the veggie rolls were packed next to the fish rolls Richard ordered, which could obviously allow for cross-contamination, but I opted not to worry about it. At some point the stress elicited by obsessively following all the guidelines perfectly must have just as many negative health consequences as being a little more lax about the rules.

I love doing yoga in a hot room, a love hot tubs, and people always make fun of me for wearing sweaters in the summer. Pregnant women aren’t supposed to do things that raise their body temperature, but my beloved piping hot baths have been an ongoing temptation. At our prenatal appointment this week, the doctor told Richard that elevated body temperature negatively affects the baby’s brain development, and ever since then he’s been strictly enforcing the rules. Our first full day in our house, we discovered that the pilot light for the water heater didn’t stay lit for longer than a few hours, which dissolved my fantasy of sneaking into a hot bath behind Richard’s back. (Update: We didn’t get the water heater fixed until I was 16 weeks pregnant, so I didn’t get a hot shower—let a alone bath—for a long time).

Now on my sixth week of relentless nausea, I began having some moments of despair. Before I got pregnant, I had tons of little joys in my day-to-day life. I used to take Foxy on walks up Bernal Hill, which has a fantastic 360 degree view, or for a long walk or run along Ocean Beach. Now I’m too fatigued. I used to love negitoro maki, exotic cheeses, oolong tea, and Philz Mint Mojito Iced Coffee. Now all of these are advised against (Update: later in pregnancy I discovered a Swiss Water Decaf Mint Mojito Iced Coffee). I even read the other day that chamomile and ginger tea, which I’ve been drinking all along, can be risky for pregnancy! I used to get a sugar fix from green tea cheese cake, brownie sundaes sundaes, and sour patch kids, but now dessert makes me nauseated. Even most yoga doesn’t feel good for me any more (I’ll post more on this in a few weeks).

Instead of wallowing in self-pity focusing on what I couldn’t do, I realized I had to shift my daily habits to include joys that I can still partake in: 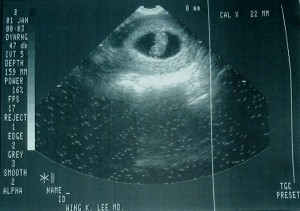 Look at how much she developed by week 19!