So many of us succumb to procrastination in our day-to-day lives, which is essentially allowing that which matters most to give way to that which matters least. Even in yoga class, we mull over what we should’ve said in an earlier argument, repeat and re-repeat mental grocery lists, and wonder self-consciously if anyone noticed that giant zit that popped up this morning. All of this is just procrastination that prevents us from being present to the real work: the svadyaya (self-study), the dharana (concentration), and the dhyana (meditation). Just as with any other work we procrastinate from, this stuff is often scary, uncomfortable, and exhausting. Anything that that spurs wild transformation usually is.

As Rusty Wells always said in class when I practiced with him years ago (and he probably still does): “If nothing ever changes, nothing ever changes.” Next time you’re in yoga class, your mantra is, “I prioritize that which matters most in this moment.” Mental chatter is definitely going to come up, but instead of indulging in it, you notice it as an observer rather than a participant. What do you cling to? What are your recurring thoughts? When is there the most mental chatter? When is there tranquility? Distraction is going to come up too. That’s an another opportunity for svadyaya. As one of my dear teachers, Les Leventhal, always used to point out: we never stop take a sip of water or fix our hair in the poses that we love. Notice.

Once you start diving into your yoga practice, you’ll find that the habits you develop start spilling over into the rest of your life too. You run for what matters most rather than lolling about in what matters least. You seize the day. You savor the richness of each moment. 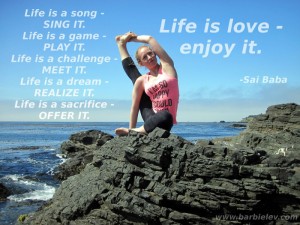 On the internet, there is widespread disagreement who wrote the following poem, so if you know who the author is please let me know!

Q: What is the path to enlightenment?

A: According to Putanjali’s Yoga Sutras, enlightenment is attained in seven stages. Including the final stage, these form the Eight Limbs of Yoga:

The last three limbs are so similar and seamless that Putanjali groups them together as samyama (perfectly controlled). Still, they are distinct stages:

Concentration (dharana) is binding the attention of the mind to a single object, place, or idea. Meditation (dhyana) is the continuous flow of consciousness toward an object. Samadhi is deep absorpotion on the object without thought of the self. Then, the essential nature of the object shines forth. (3.1-3.3) Through mastery of samyamah, knowledge born of intuitive insight shines forth. (3.5)

Even in the workout-focused yoga classes of the West, breadcrumbs that lead you along the path are still there. In public yoga classes, the focus is often on asana, the poses, and sometimes pranayama, the breath, but if you listen carefully, the other limbs of yoga are often threaded through many teachers’ cues. When yoga teachers suggests you avoid pushing so hard that you’re gasping for breath, they are talking about non-violence, one of the yamas. When they remind you to be happy in your variation on the pose, rather than grasping for the variation the person beside you is taking, they are talking about contentment, one of the niyamas. When teachers tell you focus the eyes and the mind on a drishti, a focal point, during balancing poses, they are talking about pratyahara, withdrawal of the senses. When you hear cues about detaching yourself from mental chatter and keeping your focus on your breath during savasana, corpse pose, your teachers are talking about samayama, the last three limbs.

All of this said, Putanjali’s system is only one way to journey toward enlightenment. There are many other paths.